Today I continued my quest of packaging my Python C extension for multiple OSes. Yesterday while doing a packaging "test run" with the curses "hello world" program, I found that curses is not supported on Windows (it should work with WSL, but not with the "default" Windows terminal I guess).

So the first thing I wanted to ensure today was that poppler and some of its dependencies that I need (freetype, fontconfig, libpng, and libjpeg) are supported on Windows. Ilia had suggested that I could use cygwin to do Linux-y things on Windows, so I borrowed my mom's laptop which runs Windows 7, and installed poppler and its dependencies; along with git, gcc/g++, make and cmake: 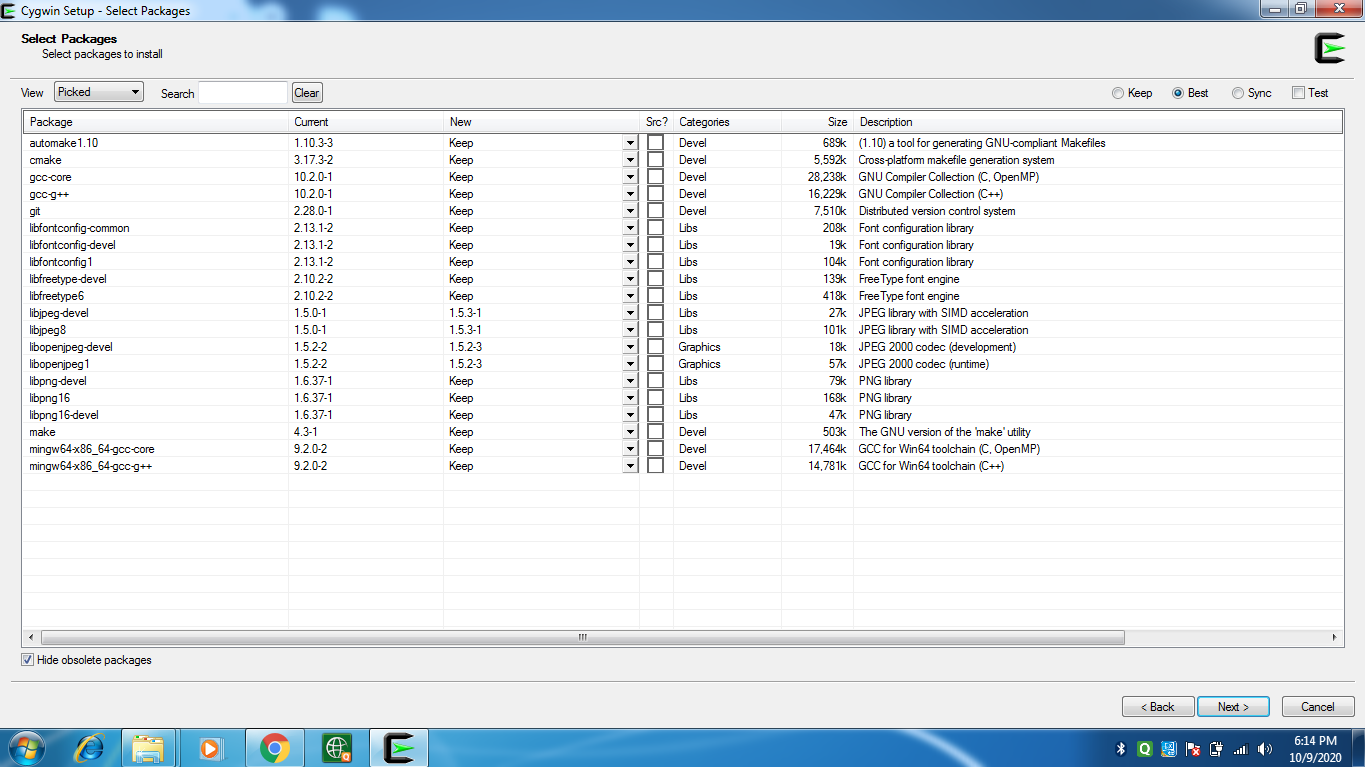 I was able to clone and build poppler from source! It still required the jpeg library to generate the Makefiles, even though I set ENABLE_LIBOPENJPEG=none. I'll have to debug that at some point so that I can remove this poppler dependency.

After the test, I wanted to transfer some files from the Windows laptop to my laptop using python -m http.server, but didn't know what the Windows equivalent of ifconfig was (to get the Windows laptop's IP address that I could access on my laptop), and also didn't want to spend time finding and installing ifconfig on cygwin. I found this nice alternative!

And after that, I went back to building wheels for Linux and macOS, and started setting up the packaging pipeline (from yesterday) for poppler-utils. The only changes I had to make to the setup.py were:

When I installed the package using pip, it called setuptools (which internally uses distutils, I think) to build the extension using g++, and link it to the relevant shared libraries using ld:

I also had to make changes to the cibuildwheel GitHub workflow:

There was also this bug I faced where delocate wasn't copying all required shared libraries into the built wheel on macOS (fastmac helped me debug again!) because it doesn't look at top-level extension modules. After searching for a fix in the open issues, I found it in this PR!

And after renaming the extension from pdftopng to poppler_utils.pdftopng (and making it "not a top-level" module), delocate started copying all the required shared libraries into the wheel!

I finally have Linux and macOS wheels! Now I just need to figure out the Windows ones.

I also looked at Windows wheels for some existing projects (numpy and arrow) to see all the libraries they bundle. Both of those wheels have pyd files, which were new to me. I learned that a pyd file is the same as a dll file on Windows, but with some Python-specific things in it.

If you have a DLL named foo.pyd, then it must have a function PyInit_foo(). You can then write Python "import foo", and Python will search for foo.pyd (as well as foo.py, foo.pyc) and if it finds it, will attempt to call PyInit_foo() to initialize it.

I also did a mock interview (which was really helpful!) with Vaibhav (who is super awesome!). And I also paired with Ilia to look at his C++ & WebAssembly project. We implemented rendering a multi-line string in a canvas inside the browser using C++! Pointers are fun! I need to learn how to write pointer code fluently like Ilia.

Since half of the second half of my batch is over (only 3 weeks left now!), I did a "things" check-in. I haven't included the things I dropped in the check-in I did at the batch midpoint:

I've condensed these down to the following: