I'm a Star Trek fan. Space has always fascinated me. So when I saw a friend reading this, I just had to ask him to lend it to me. Nice book BTW.

And after watching Cosmos: A Spacetime Odyssey, I've been looking for ways to dive into astronomy. I started at the beginning of this year by trying to contribute to KStars and astropy. Succeeded in getting some minor patches merged in astropy. The terms I came across in both were too advanced for me, so I decided to go through an astronomy course, but soon forgot about it.

Fast forward to 11th September, I'm lazying around on Facebook, when I see a post by AAAD about an overnight observation at Inchhapuri on 12th. I've never seen my brain make a decision so fast, in my entire life.

The time to reach the rendezvous point HUDA City Centre was 5 PM and it would take me two hours to reach there so I packed everything mentioned in their checklist and left at 3 PM. Interestingly, I reached half an hour earlier. Called the observation coordinator Sneh Kesari to find that he was already there. We chatted while waiting for other people to show up. Sneh told me that he is a science communicator and teaches astronomy to school students.

After about half an hour when everyone showed up, we left for Inchhapuri which is a small village about 40 km from Gurgaon city. Carpooling FTW!

Upon reaching the Shiv Mandir at Inchhapuri, I saw the star-studded night sky I'd always seen in pictures. It was beautiful.

Most people were already setting up their telescopes on top of the Mandir. Here's an image of the site by Vijay Kapoor, a fellow astronomer. 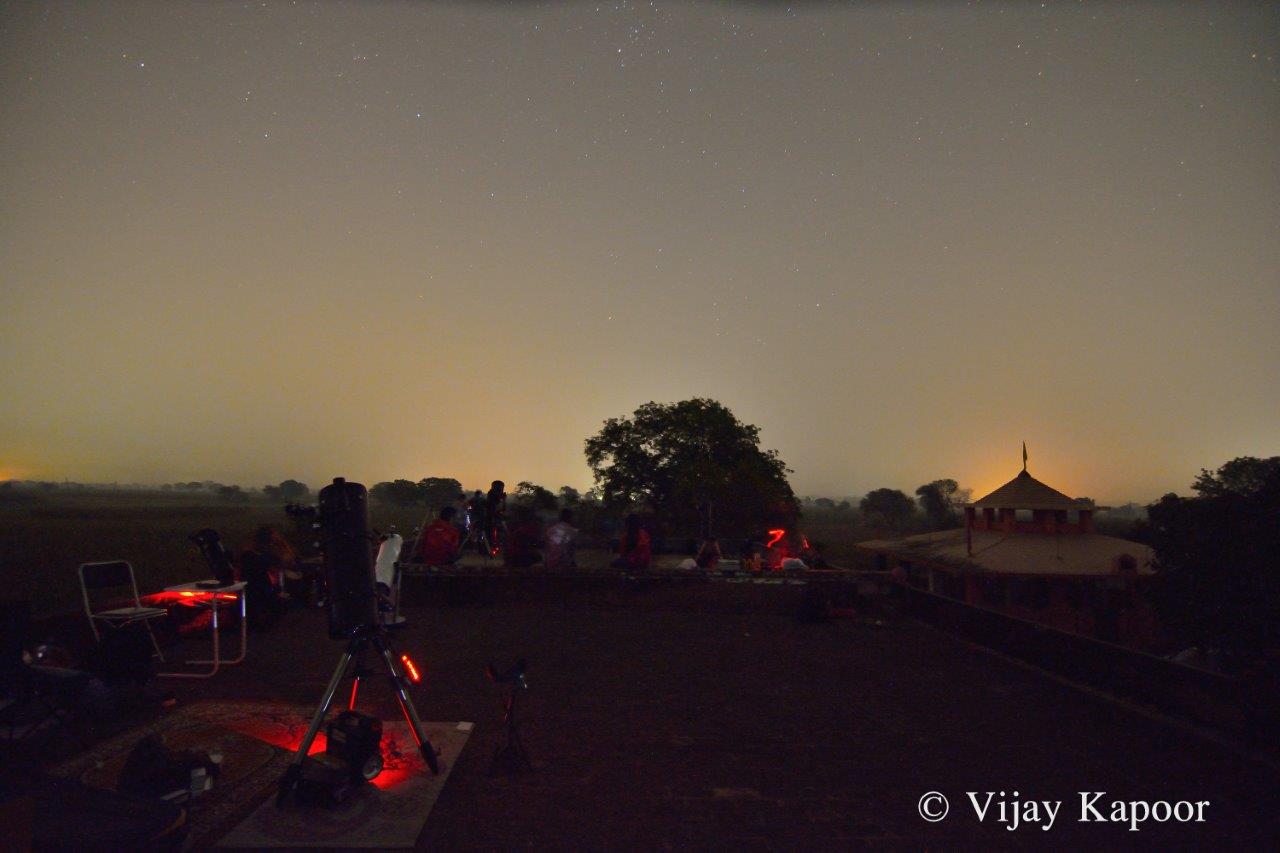 Here are some protips:

Since I didn't know anyone, I went to Sneh who was setting up his camera for astrophotography. As he was capturing star trails, he told me how the camera should include a large part of the sky with Polaris in the middle, with a small part of the ground as reference and some other stuff about ISOs I didn't understand. Here's the image he captured.

He also taught me how to locate Polaris, using Cassiopeia. One should trisect the lower obtuse angle made by the stars and move along the lower trisection till you find the brightest star in that region. Later in the night, there was a more elaborate Sky 101 session. Many people had lasers which they used to point out stars. The lasers seemed to extend to infinity in the darkness. One even looked like a lightsaber! 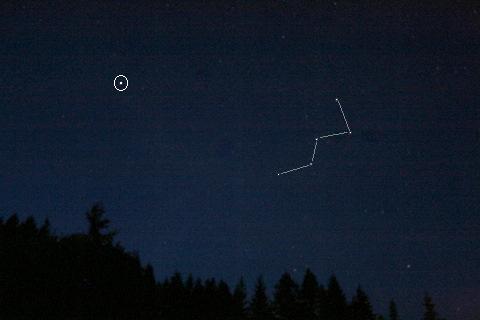 Ajay Talwar, who is a professional astrophotographer and who basically runs AAAD, then called everyone to discuss about the telescopes present and how the n00bs should ask questions and not sit quietly in a corner :D

I made observations mainly on two telescopes: Jasjeet's 8-inch Newtonian Reflector Dob, and Ajay's 12-inch Meade LX200. Jasjeet started astronomy in April this year. He recommended NightWatch: A Practical Guide to Viewing the Universe by Terence Dickinson to me, which I plan to read sometime soon.

As I didn't have my own observation plan, I went forward with others' plans. Through the night, I observed planets, Messier and Caldwell objects; some of which include:

If you haven't seen anything through a telescope yet, I must warn you that it is not as glamorous as we see in those images; the planets are not as big, the nebulae are not as colorful but it is an awesome experience nonetheless ;)

The milky way looks just like the images though :D 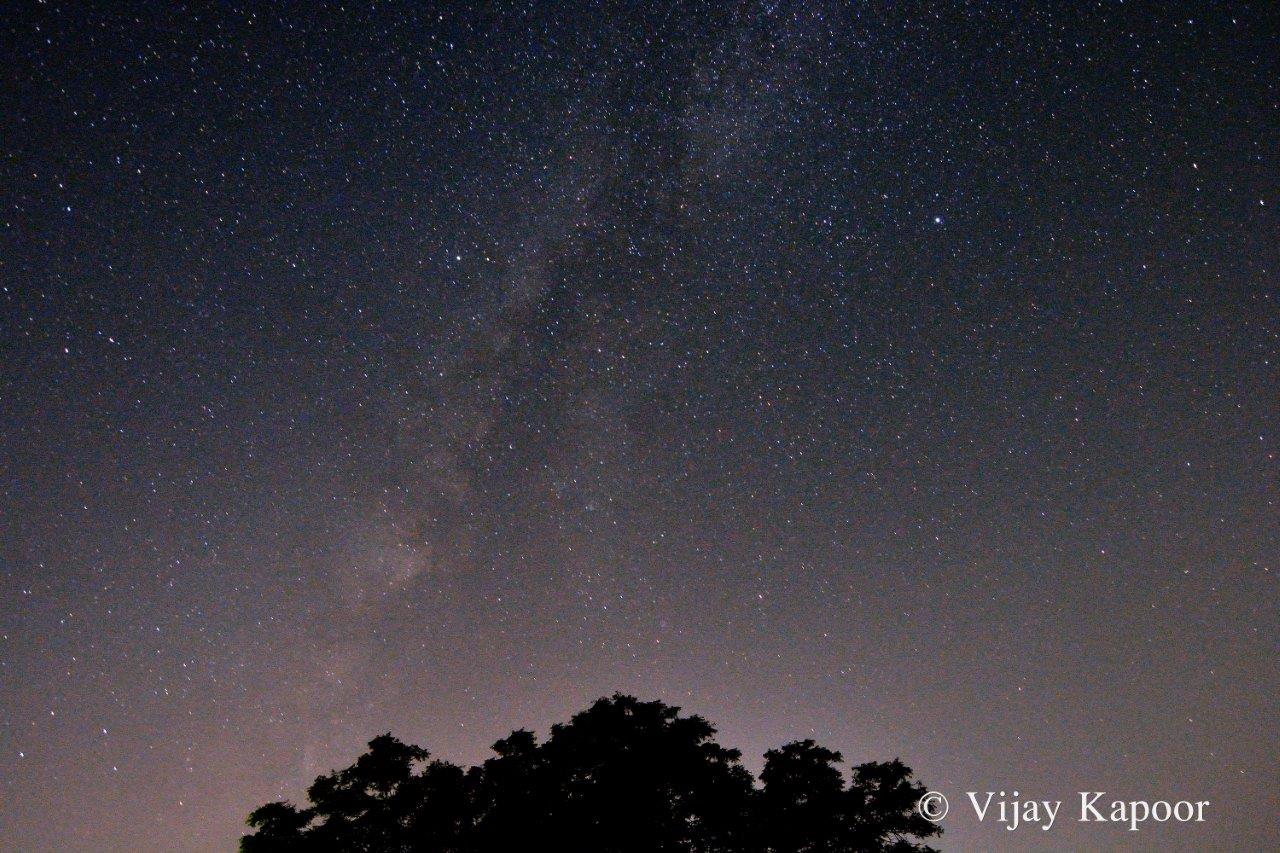 It was awesome meeting people who share the same interests as me. Throughout the night, we talked about Cosmos, Neil deGrasse Tyson, how we could observe a supernova in our lifetime, physics, collision of andromeda and milky way and a lot of other things.

Now that I'm back in Delhi, I miss that starry sky. Can't see anything here in Delhi :( Though, AAAD is planning another observation at Hatu Peak on 9th and 10th October, to which I'm planning to go. You can join their mailing list if you want to know more about that observation.

I will write another blog post about that one if I manage to get there!

Till then, clear skies to us all!